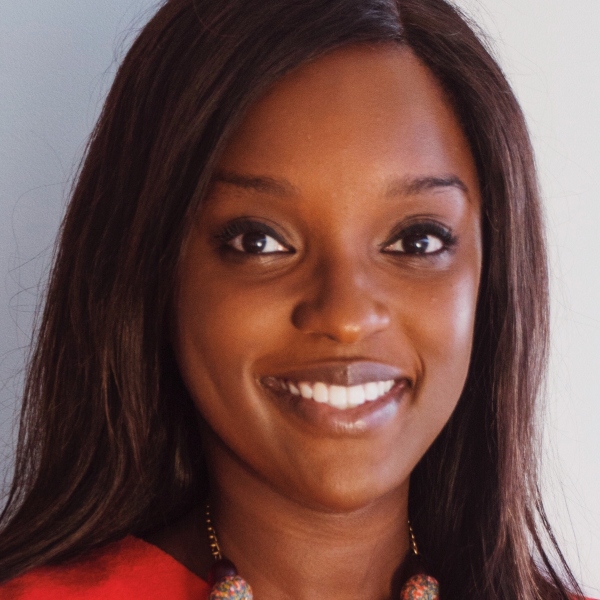 Akinyi Ochieng is a Gambian/Kenyan-American writer, brand strategist and social impact leader. As a Corporate Communications/marketing professional, she drives high-impact social innovation and global communications programmes across the Global South, with a keen interest and passion for Africa. Akinyi writes about business, culture, and politics in emerging markets for a diverse set of publications including the World Economic Forum Agenda, Quartz, Slate, and Forbes. She is the Esther Ocloo Fellow at Botho Emerging Markets Group as well as an advisor to The Boardroom Africa. In 2019, Akinyi was named one of the 100 Most Influential People of African Descent under 40 in the field of media and culture as part of the United Nations International Decade for People of African Descent. She was a Princeton in Africa Fellow (2015-2016,) holds an MSc from London School of Economics and a BA from Yale University. More about Akinyi at www.akinyiochieng.com

I think being transformative is rooted in incremental change — in being 1 – 2% better each week. While I want to affect change quickly, I increasingly realize the power of compounded growth. Generating impact also means being deliberate in how you approach your time management. Recognize that every choice you make has an associated opportunity cost.  If you do not know the opportunity cost you should not make that choice because your time could perhaps be better invested elsewhere. Having worked in lean organizations in the past, I find that to be particularly true for smaller businesses where you have to think fast, think big, and make smart bets.

Most people associate marketing and communications with products/private sector but you use it for social impact. How does that work in practice?

91% of global consumers expect companies to do more than make a profit but also operate responsibly to address social and environmental issues. But how do they hear about it? That’s where marketing and communications come in — storytelling is a fundamental part of social impact. Successful stakeholder engagement requires communicating what you as an organization have been doing to both internal and external stakeholders such as employees, policymakers, and customers. Brand storytelling is multi-layered. From messages from marketing to product innovation and customer interaction, it’s critical to tell genuine stories that are anchored around messages of community. For that story to resonate, the tone can’t be too promotional or self-congratulatory — it has to be honest, balanced, and most critically, transparent.

You work across business, culture, politics, etc with quite a wide range of stakeholders. What’s your ‘success-kit’ for working with groupings as diverse as for example farmers on the one hand and multinationals on the other?

Learning how to communicate with different cultures and personalities can go a long way not just in the workplace but outside it, too. In a multicultural, global society, code-switching is becoming a more regular occurrence. But to do this genuinely and credibly, it’s important to take time to understand the culture you are operating in — from history to etiquette, and more. Remember that people appreciate the details, and respectful curiosity about another person’s culture not only demonstrates your commitment to learning about their working environment and cultural context but it can also be a great icebreaker!

Emerging markets are said to be home to 85% of the world’s population. How is Africa faring in trying to redefine itself on the global stage as an emerging market?

One of the trends that excite me the most and which I keenly observe is trade across the Global South. According to recent Brookings research, for example, African exports to the US and EU have been on the decline since 2006 while exports to countries such as India, Indonesia, and Russia have nearly doubled  Since 2009, China has been Africa’s largest trading partner. GCC (Gulf Co-operation Council) states such as Saudi Arabia and the UAE have made the region one of the linchpins of their economic diversification strategies as they scale their investments in sectors such as infrastructure, agriculture, and logistics across Africa. Today, there are over 12,000 African businesses registered with the Chamber of Commerce in Dubai. As Africa begins to increase its presence on the global stage, more promising trading partners are emerging and with them the opportunity for all its nations to lead on their own terms.

You seem confident that smaller countries in Africa will drive growth in inter-African trade. What benefits do you see for such countries and more broadly for the whole for Africa beyond the economics if this prediction comes true?

Across the world, geographic proximity is a large driver of trade as a country’s top trading partners are more often than not its neighbours. Because there is a higher proportion of value-added trade within Africa than what the region sells to the rest of the world (primarily raw materials), increased inter-African trade could be a tremendous boost to employment. Consumers in smaller countries gain from trade liberalization because they will have access to a greater variety of goods while exporters in these same countries can access larger markets and more competitive inputs. That being said, to truly capitalize on this potential, there must be infrastructural improvements as well as attention to the growth of instruments like non-tariff barriers.

Your other prediction is that Africa’s big youth population has a brighter future. How so?

Around 60% of Africa’s population is currently under 25. But that demographic shift shouldn’t be viewed as a rosy statistic — it underscores the urgency of developing a more equal society. Alcinda Honwana, a visiting professor of anthropology and international development at the Open University, has written extensively about a phenomenon she calls “waithood” — the daily reality of unemployment, underemployment, and low-quality work for young people across the continent.

Despite “waithood” and the challenges of high unemployment, there are now more platforms for young Africans to shape their futures that are not controlled by the establishment or old guard such as growing tech hubs and social media. These new mediums are enabling young Africans to build new networks, attract followings, and build businesses in ways that they may not have been able to before even 5 or 10 years ago.

What does ‘women in leadership’ mean to you and in your experience what really gives women influence and a seat at the table?

‘Women in leadership’ to me means multiple women in the highest leadership positions. A critical mass of women is needed for their positive influence to be felt. In a recent study of German firms, for example, researchers found that Boards need a critical mass of about 30 percent of women to outperform all-male boards

In my experience, a strong relationship with a career “sponsor” is often the key to giving more women a seat at the table. A sponsor is a senior individual often in the same company or industry who helps to push a junior employee by nominating them for new opportunities and career-making/ profile-raising responsibilities.  It is critical to have more than just a handful of women at the top because women are more likely to be asked to support and mentor junior women.

Today, women are called upon to “diversify” committees or represent the female perspective. While that inclusion is good, it can come at a cost as it may lead some women to fall out of the running for the high-stakes assignments that pave a path to the C-Suite. To shift this narrative, we need more men to sponsor women: to use their personal clout to advocate for and place a more junior person in a key role.

You like to cook when you’re not wearing your many hats. So what’s the secret sauce to Akinyi being so prolific?

For more information on Vera Ng’oma’s work and resources in leadership, personal and career development please go to http://j.mp/verabooks